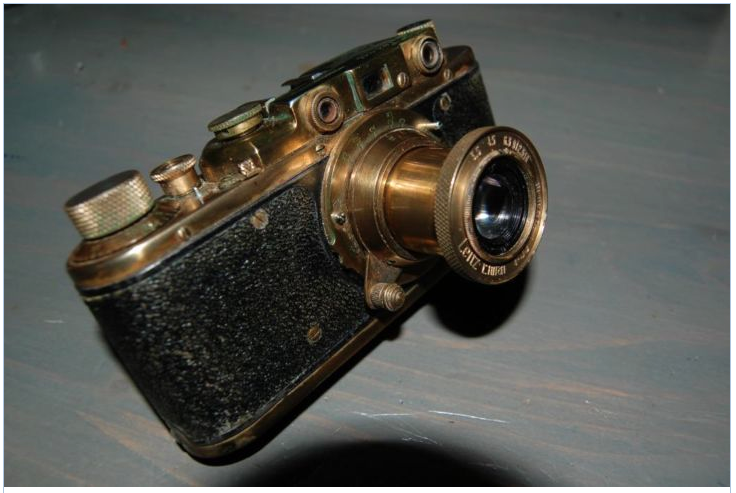 Every now and then you see them surface, those expensive and rare Leicas. The Leica Luxus, for instance. Only three of those gold plated Leicas were ever made, and only one of those is known to be in existence today. Or the Wehrmacht, Luftwaffen or Kriegsmarine engraved Leicas of the second World War. But most of the time these ‘rare’ cameras are fakes. How can you tell the true Leicas from the fake ones? A small guide.

First of all, if it is too good to be true, it probably isn’t true to begin with. Take that as a guideline and the majority of ‘rare Leicas’ is out the door, simply because they can be had for USD 100-200 Buy It Now price at eBay or Craigslist. It gets more difficult after that.

Second, Leica never produced a brass camera. Their cameras were either Black Paint or Chrome, and a very small number with specific serial number range was delivered in Military Gray to the German Navy and Army. So forget about all those gold looking cameras, they are polished brass FEDs and Zorkis.

Third, Leica never produced any gold cameras, apart from the three rare Luxus Leicas, of which two are unaccounted for. If you do come across an actual gold Leica, it’s been replated by some strange fellow from Poland, who also gold-plates Canons, Ricohs, Contaxes and whatever. Prices are through the roof, and the original camera most of the time is worth a few hundred dollars tops, while the super-thin gold plating them has diminished that value, not added any value to it.

Fourth, Leica never produced a camera with a ‘Kriegsberichter’ inscription, with an eagle-and-swastika lens cap, with a submarine engraved on the top plate, no Olympia 1936 camera, or any other nice creative invention.

Fifth, if it is covered in something funky like wood veneer, it’s a fake. The majority of Leicas was covered in vulcanite, it resembles leather by structure but actually is a hard baked sort of rubber that is applied to the body shell while hot. Some cameras later were re-covered in leather or leather-look coverings. There’s even companies that supply these replacement covers, I like Hugo Studio for their service and ever expanding catalog of nice camera coverings.

Last, to even tell the FEDs from the Zorkis: look at the camera on the top of the page. Can you see the smooth black ‘collar’ around the lens mount, and the smooth black rims that divide the vulcanite gripping and the metal bottom and top plates? Only Zorkis had that! 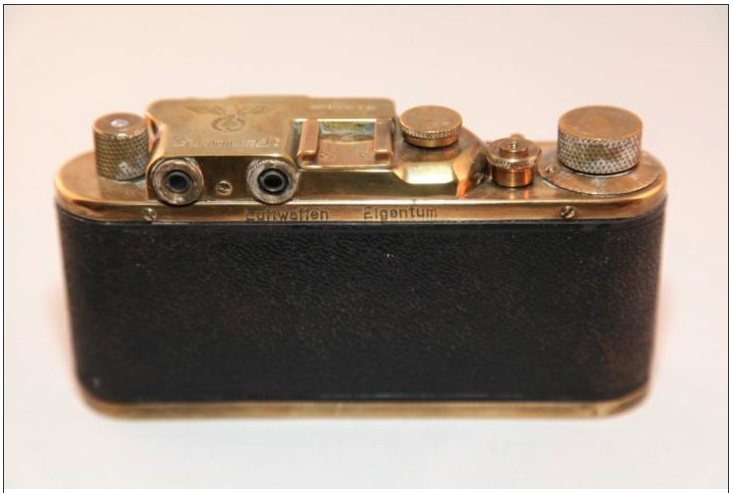 The Luftwaffeneigentum (yes that’s correctly spelled in German) inscription is found on some true Leicas, but it will at least be engraved straight and not crooked like on this Zorki. 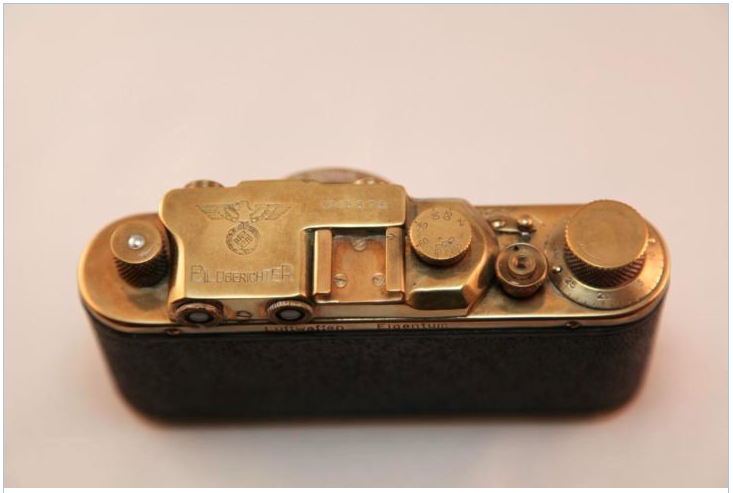 Now, for the majority of fakes: the cameras that started out as a FED or a Zorki or a Mir camera and were stripped, engravings ground off, re-chromed,re-engraved and re-assembled. There’s a number of tell-tale signs: 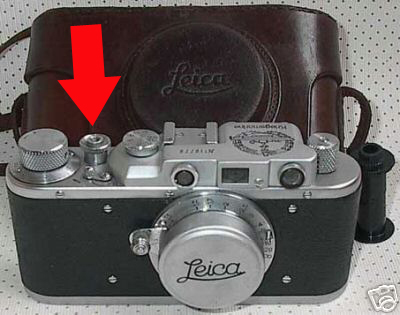 The ‘bowl’ around the release button, native to many FED’s and Zorkis. FAKE! 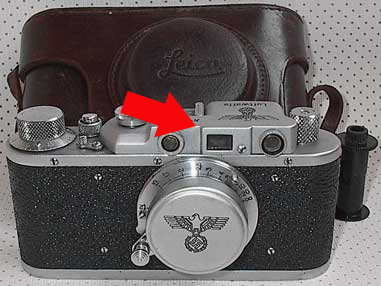 The lack of a free-standing ‘window pane’ on the viewfinder window, also native to FED and Zorki. FAKE! 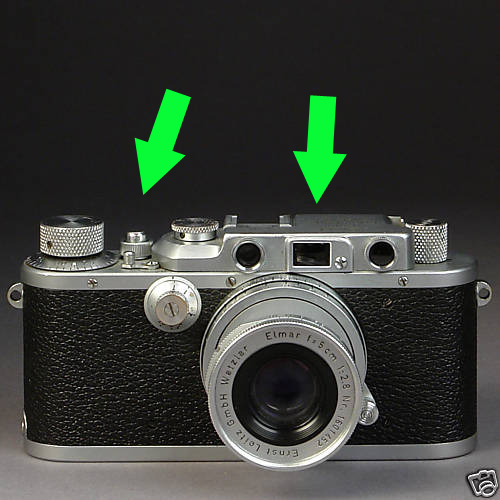 This is what it is supposed to look like, the combination of the release button without a ‘bowl’ and the viewfinder window with its own ‘window pane’ tells you its a true Leica.

Other dead give-aways: a black laquered ‘collar’ around the lens mount (Courtesy Zorki and seen on several Zorki’s on this page, not on FED’s), two-tone chrome (some parts re-chromed, others not), engraving errors (no, really!) and a tilted letter ‘e’ in the ‘Leica’ engraving, signalling the engraver wasn’t that skilled yet. Attention: the above green-arrowed Leica III has a slow-times dial on the front but not all Leicas had that. Not all Leicas had strap lugs either. To create Leica fakes, FED-1 and Zorki-1 series cameras are used, but these can be fitted with a Zorki-2 body shell, which does have strap lugs. So, for various reasons strap lugs and slow times dials are out to determine fakes.

If you have the opportunity to look inside the body, notice the difference between the rangefinder coupling on a Leica and the various couplings on FED’s and Zorkis, none of which resemble the Leica. 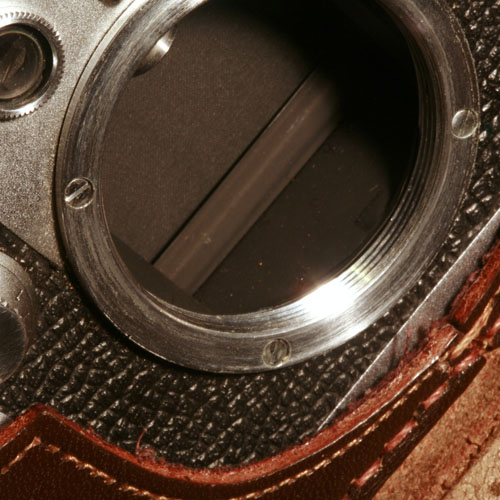 The Leica coupling is a wheel-like one (shown top left in the above shot), the FED and Zorki couplings shown below can be seen extensively on a Fedka page, here.

This camera isn’t even the correct model, it’s a Zorki 2C: 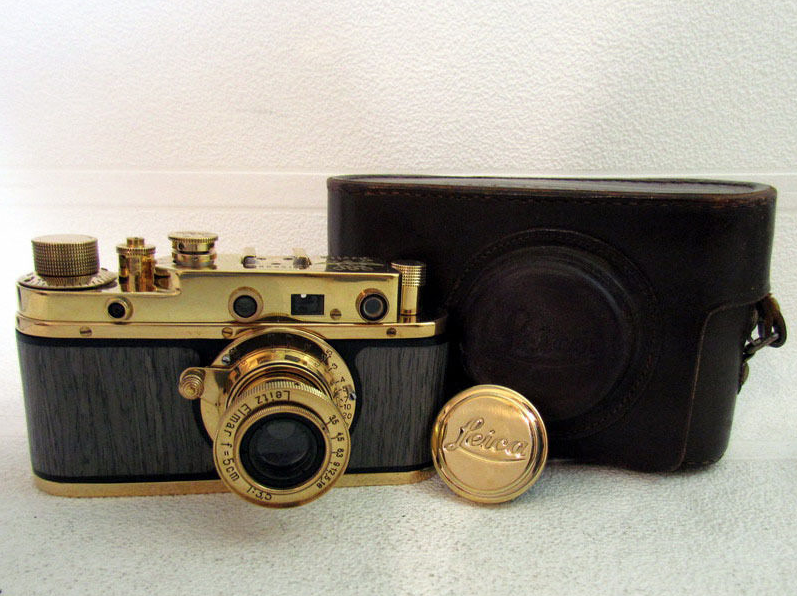 The covering on this camera looks like grey wood veneer.

The Industar-22 has a ring to set the aperture, while true Elmar lenses have a small block-like grip…

… and the engraving is very nice but it’s totally fake. No Leica was ever engraved commemorating the 1936 Berlin Olympics.

A clone is not a fake

There are a number of factories from Japan that produced Leica clones in the 1950’s and 1960’s. Minolta and Canon started out producing Leica clones. But, faking these clones into Leicas is something you do not have to worry about, the clones sometimes are worth more than the Leicas they resemble.

One more thing, Leica M cameras never were cloned or duplicated, save for the Chinese Red Flag 20, an attempt to copy the Leica M4 fuelled by the camera love of mrs. Mao.

If you happen to come across that camera and the price is similar to that of a Leica M4 you should buy it, since the Red Flag 20 was made in a very limited batch and easily sells for USD 10,000 when complete with its two lenses: 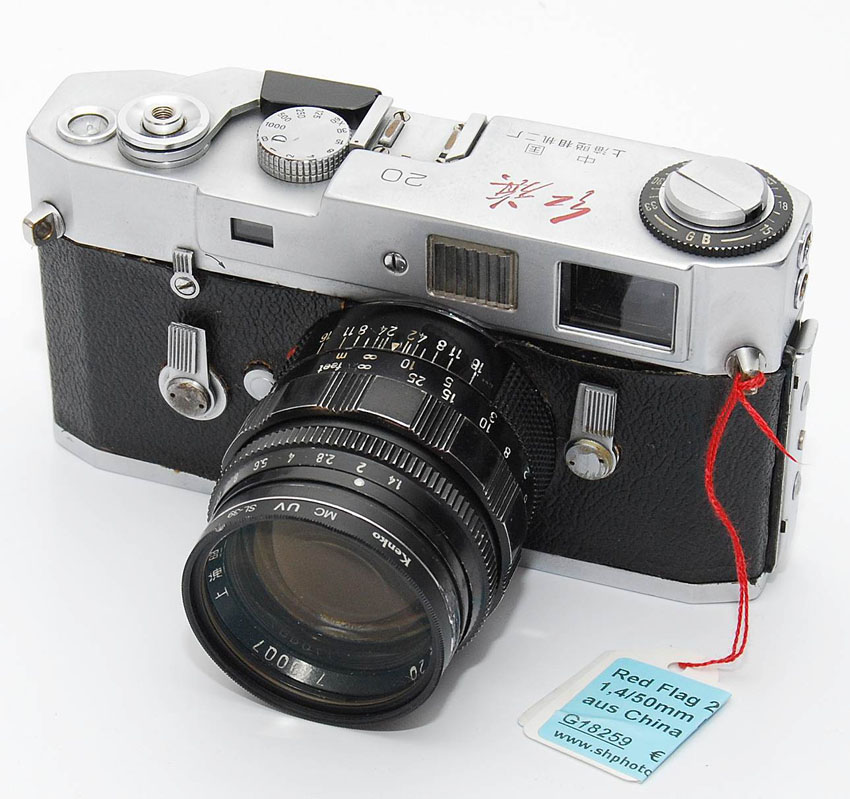 PS: the Leica II (which is the most faked model) often came with a Leitz Elmar 50/3.5 collapsible lens. The Russian Industar 22 or 50 is a look-alike lens and often faked into an Elmar. See above on the gold Zorki-2C to what the Industar-22 looks like.

PS-II: Still not sure? Download a Leica Historial Family Tree created by Leica fanboy Thorsten Overgaard. When viewed enlarged, all features of Leica cameras can be made out quite easily.

PS-III Find a comparing video on above listed differences here:

One Reply to “Barnack Leica: true or fake? A comprehensive guide”